Black Veil Brides "Knives And Pens"
Andy Biersack moved to California in 2009 to move forward with Black Veil Brides. He already had a following from playing shows around his home under the name Black Veil Brides. In February, Chris Hollywood teamed up with Andy and became the guitar player for BVB. In March, Sandra Alvarenga joined the band on drums.

Black Veil Brides took off after the release of the music video for the song “Knives and Pens” on June 17th, 2009. David Sasik played the boy in the video who was bullied at school. The video was directed by Patrick Fogarty and it quickly gained attention, receiving over 60,000 views in the first 6 days. They made it into the Top 100 viewed musicians on Youtube on June 1th8 and also reached the Top 20 "Most Favorited" and Top 50 "Most Discussed" videos on Youtube.

Pan (guitar) and Ashley Purdy (bass) joined the band in July 2009. The band played a "debut show" on August 29th at the Bipolar Art Show at the Exhibit A gallery in Los Angeles. Black Veil Brides soon signed to Standby Records.  In September of 2009 Chris Hollywood left the band due to personal conflicts and in November, Pan also left the band.

Jake Pitts and Jinxx (both on guitar) joined Black Veil Brides. The band went on the "On Leather Wings Tour" in December 2009 and the "Royal Family Tour" in March/April of 2010 with From First To Last, Eyes Set To Kill, and Confide.

Black Veil Brides "Perfect Weapon"
Black Veil Brides started recording their debut album in February 2010 and involved their fans as much as possible. The band invited fans to be a part of a shoot in Hollywood that would be used for the album artwork and also invited fans to track gang vocals for the album. The band held a listening party for their album on June 19 at the Exhibit A Gallery and they released the album, We Stitch These Wounds, on July 20, 2010 on Standby Records. The album got into the Top 40 of Billboard's Top 200 album chart and got to number one on the Independent chart. We Stitch These Wounds has currently sold over 100,000 copies (as of October 2012).

In May, the band announced they would be making a new music video and again wanted the fans help. An open call was put out for fans to join the band for the shoot in Los Angeles. The video, "Perfect Weapon," was released June 15, 2010. The single "Perfect Weapon" was released on June 8th and reached the Top 50 on iTunes on its first day. 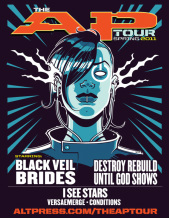 In October/November 2010, Black Veil Brides headlined the "Entertainment or Death" tour with Motionless in White and William Control.  On October 10th, bassist Ashley Purdy took a fall that resulted in a fractured jaw and nose. Ashley had to take a couple weeks off the tour, but the band continued on. Ashley rejoined the band on tour on October 28th.

In February, Black Veil Brides supported the Murderdolls on a tour in the UK. In March 2011 Black Veil Brides went to Japan for a short tour. While in Japan, they experienced an 8.9 magnitude earth quake and had to end the tour early. In March-May of 2011 Black Veil Brides headlined the AP Tour with Conditions, Versaemerge, I See Stars, and Destroy Rebuild Until God Shows. On March 26th, BVB played at Extreme Thing Sports and Music Festival. 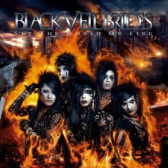 Set The World On Fire 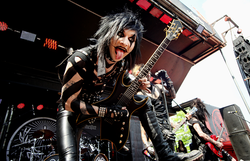 Jinxx, Rock On The Range
The band started recording their second album in early 2011. This record was their first on Universal Republic/Lava Records. "Fallen Angels" was the first single for this album and was released on May 9, 2011. The single was quickly followed by a music video, released on May 24th and directed by Nathan Cox. Just days later, the band announced that they would release another music video, for their song "The Legacy," on May 31st, directed by Patrick Fogarty. Black Veil Brides second album, Set The World On Fire, was released on June 14th, 2011. The album reached the Top 20 on the Billboard chart, #2 on the Hard Rock charts and #3 on the Rock charts. The track "Set The World On Fire" was used on the "Transformers: Dark of the Moon" soundtrack. 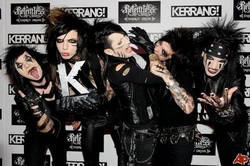 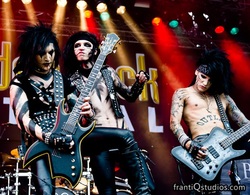 After returning to the US, the band played a few more events before going on Warped Tour, which would start on June 24th. On the 17th, they performed on the show The Daily Habit on Fuel TV (although it was not aired until later). On the 18th, Black Veil Brides put on a free show in Hollywood. During the show, Andy fell from a wall and shattered three ribs. Due to this injury, he would have to miss the beginning of Warped Tour. The band went on Warped Tour without him and, although they were unable to perform, did signings for the fans. Andy joined the band on July 1st in Pomona, California to play the rest of Warped Tour. 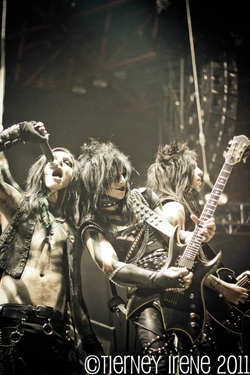 November 26, Photo by Tierney Irene
In November, the band embarked on the Buried Alive Tour which ran from November 23rd to December 17th. Avenged Sevenfold headlined the tour and Asking Alexandria and Hollywood Undead were also supporting acts. On December 13th, they released the 'Rebels' EP with consisted of two covers, 'Rebel Yell' (Billy Idol cover) and 'Unholy' (KISS cover), and one new song 'Coffin.' The EP also included an extended version of their 'Rebel Love Song' music video. 'Rebels' was released exclusively on iTunes. While on the Buried Alive Tour, Black Veil Brides recorded a live video for 'Rebel Yell' along with some backstage/pre-show footage for the video.

To start off 2012, Black Veil Brides went to Mexico and South America for the first time. They played a show in Mexico on January 12 followed by shows in Argentina, Chile, and Brazil. Shortly after returning to the states, they left for Australia. In the end February and beginning of March they played Soundwave and Sidewave shows. Later in March they went on the Rebels Tour with Destroy Rebuild Until God Shows. This tour included Germany, the Netherlands, and the UK.

They then returned to the US and on April 11th they performed at the Revolver Golden Gods Awards. During their set, Dee Snider of Twisted Sister joined them on stage for a song. Jake and Jinxx also won Best Guitarists that night. 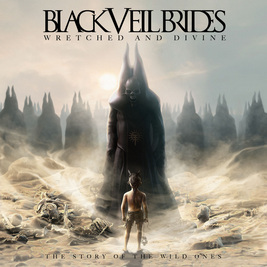 Wretched and Divine was released on January 8, 2013 on Universal Republic/Lava Records and it reached #1 on the iTunes charts, #7 on the Billboard Top 200, and #1 on BBC Radio 1 Rock Chart. William Control performed as the voice of F.E.A.R. on the album in each of the "Transmission" tracks and in the song "Shadows Die." Bert McCracken of The Used appears on the song "Days Are Numbered" and both Roberta Freeman and Juliet Simms have guest vocals on the song 'Lost It All.'

Black Veil Brides also made a 45-minute film titled Legion Of The Black to accompany Wretched and Divine. The film was directed by Patrick Fogarty and it tells the story of The Wild Ones' battle against F.E.A.R. (For Every and All Relgion). The movie premiered in Los Angeles in December. It was limited to theaters in Los Angeles and New York, but it was made available for everyone to view on Facebook on January 6th. 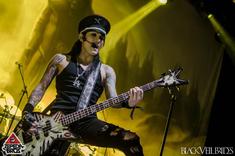 COTWO Tour - Mexico City - Photo by Zepeda Bros
On January 4th, the band began the Church Of The Wild Ones Tour in Las Vegas, NV with William Control as their support act. The tour went through North America until March with a break in February during which the band went on the Kerrang! Tour in the UK. Black Veil Brides had planned to do a European leg of the Church of the Wild Ones Tour in March but were only able to play the first four shows due to severe illness. The rest of the shows were cancelled, but the band will be returning to Europe in November/December 2013.

On May 2nd Black Veil Brides won Song Of The Year for 'In The End' at the Revolver Golden Gods Awards. The crowd was disrespectful towards the band when they came on stage to accept their award and Andy gave a heated speech to the crowd. He later apologized for the appearance-related remarks and explained what he was thinking in a blog post. This award made Black Veil Brides the first band to win an award 3 consecutive years at the Golden Gods. 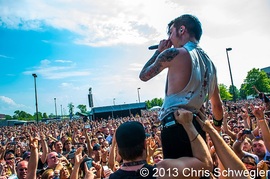 The band released the Ultimate Edition of Wretched And Divine: The Story of the Wild Ones on June 11, 2013. It included three new songs "Revelation," "Victory Call," and "Let You Down" and the movie Legion of the Black. They also released a lyric video for "Revelation."

Black Veil Brides won Best Live Band at the Kerrang! Awards on June 13th; however, they were not able to attend the awards because they were starting Warped Tour in the US. After doing Warped Tour all summer, the band went on the Monster Energy Outbreak Tour to support Bullet For My Valentine. In November and December they went to Europe for The Church Part II.

Following shows in New Zealand, Australia, and Singapore in early 2014, Black Veil Brides went back into the studio with producer Bob Rock to start working on their fourth full-length album. The album is expected to be released in the fall.

In May 2014, Andy announced a side project called Andy Black. The project debuted on May 19th with the release of a music video for the song "They Don't Need To Understand."